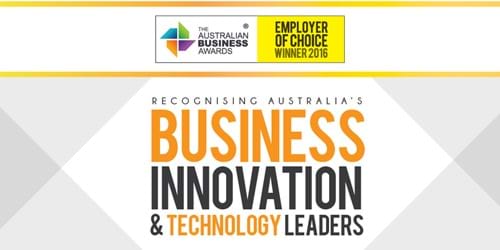 The Recruitment Company has scooped up two Australian Business Awards this year, the first as an Employer of Choice 2016 and the other for Product Innovation.

Sarah Banek, The Recruitment Company’s People and Performance Director and the architect of their award winning culture says of the Employer of Choice Award, “We’re really excited about this award. It’s a great market out there, we’ve been really  busy, but from a cultural perspective that brings about its own challenges. We’ve really thought through our internal systems to drive the right culture and they did us proud in some bad years and have held us together in the boom times as well. Our culture is about transparency, trust and driving high performance and intensity.  This award is real vindication of the success of that.”

2016 is the third year The Recruitment Company has been named an Employer of Choice by ABA prior to which the company was named as the 10th (2012) and the 12th (2013) best place to work in Australia by BRW Best Places to Work.  The focus on building a strong culture of service has paid dividends with a significant increase in revenue over these years and the hiring of a fantastic team.